Claudia Weiss de Machado runs her own wool retail company by the name Don Baez Eco Chic. The brand sources only so-called grey wools from Uruguay and uses them undyed in their fashion and accessories products. All products are manufactured in Uruguay and sold online and through the Don Baez shop in Montevideo.

In this interview, Claudia Weiss tells the story about how she got started working in the wool industry by learning directly from her father. She also speaks about her vision of making consumers into wool fans.

Claudia Weiss de Machado was born in 1958 in Montevideo, Uruguay. Her Czech father Fritz Weiss, was a passionate and very successful wool exporter. Claudia attended the British Schools in Montevideo and later graduated from Sussex University (UK) with a B.A. in Economics and Italian. Later she spent one year in Rome where she developed a keen interest in fashion.  Claudia lives between Montevideo and her small organic farm near Punta del Este with her husband and three children.

Claudia has worked alongside her father, who has been an important mentor for her, for 20 years. Claudia’s dream had always been to start a wool brand in un-dyed fine wool, which she could source locally. She named her brand after her father, whom everyone called ‘Don Baez’. In 1997 Don Baez started out making woven blankets. Since then the collection has grown to include a wide range of different products including capes, jackets, ponchos etc.

Her interest in fashion, as well as her desire to support animal welfare and a healthy attitude to life (LOHAS) started at an early age. Through the brand, she has created wearable designs that are simply tailored with a feminine edge but which also emphasize the sustainability of un-dyed wool. Her intention is to make Don Baez’s designs have a style of their own and be timeless and hopefully very chick.

Don Baez opened its first store in 2013 in Punta Carretas – the trendiest neighborhood in Montevideo. The products are also available in many Uruguayan wineries and top hotels.

[spp-timestamp time=”09:47″] About the products of Don Baez Eco Chic

[spp-timestamp time=”18:23″] The importance of having a clear vision for your brand

[spp-timestamp time=”21:18″] The need of educating consumers about wool 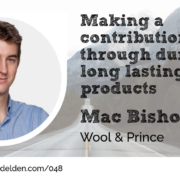 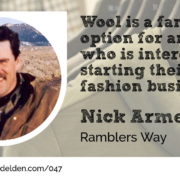 #047: Nick Armentrout about the all American wool supply chain at Ramblers Way
0 replies