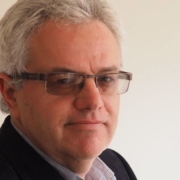 Victor Chesky is a lifelong wool industry journalist and publisher of  Wool2Yearn Global, Wool2Yarn China, Woolnews.net as well as woolbuy.net. Being an observer and documenter of the industry, Victor shares his insights into the industry in this episode. His work as a journalist also let him travel around the world and he talks about his most favorite moments. In addition, he has valuable advice for international wool industry business to be more successful in China and how to communicate better with future and existing customers.

Victor Chesky was born in the former USSR. He immigrated to New Zealand aged 17. He started working in The Dominion newspaper in New Zealand in the 1980s and this was his introduction to media, publishing, and advertising.

He established International Trade Publications (ITP) in 1986. Its first wool magazine promoting New Zealand wool was published in the Russian language when the Soviet Union was still the biggest buyer of wool. After the collapse of the Soviet Union this publication was superseded by a New Zealand / Australian English language edition that soon expanded to include profiles on exporters and processors in Peru, Argentina, Uruguay, South Africa, Russia, UK and Eastern and Western Europe.

In 1999 ITP further expanded its publication list to include WOOL EXPORTER CHINA (now Wool2Yarn China), a Chinese language publication reflecting the growing importance of Asia, and in particular China. This magazine plays an important role as a communication link between the global wool industry and the wool industry in China.

ITP moved its office from NZ to Melbourne Australia in 2000. Its annual flagship publications are wool2yarn China and wool2yarn global. They are circulated to over 12,000 wool and textile companies in more than 60 countries each year. ITP also publishes two online industry websites – www.woolnews.net a monthly electronic newsletter and www.woolbuy.net an online platform for buyers and sellers of wool and speciality fibre.

#031: Jonathan Dyson from Twist Magazine about the growing desire of consumers to know the story behind a product

#055: Ben Watts about how automation is helping wool growers on farm